A new musical by Corey Payette and Julie McIsaac

Les Filles du Roi is a gorgeous new trilingual musical from the creators of last season’s groundbreaking Children of God. The powerful story of Kateri, a young Mohawk girl, and her brother Jean-Baptiste whose lives are disrupted upon the arrival of les filles du roi in 1665. They forge an unlikely relationship with young fille Marie-Jeanne Lespérance – whose dreams of a new life are more complicated than she could have imagined. Over the course of a year, Mohawk, French and English journeys collide, setting the stage for the Canada we know today. Payette’s music connects the heartbeat of the drum and the soaring voices of our female ancestors in a thrilling contemporary score, weaving three languages and rivalling the beauty of Canada’s most stunning landscapes.

A new play by Julie McIsaac

Hours before the opening of the perilous king crab fishing season, Danny, a young Newfoundlander, arrives in Alaska, desperate for a job.  A local fisherman, Cal, grudgingly agrees to help him out, but past and present collide when Lizzie, a feisty young woman from home, shows up.  A modern fable steeped in maritime lore, The Out Vigil questions our ability to accept the natural world for all that it is, both beautiful and terrifying. 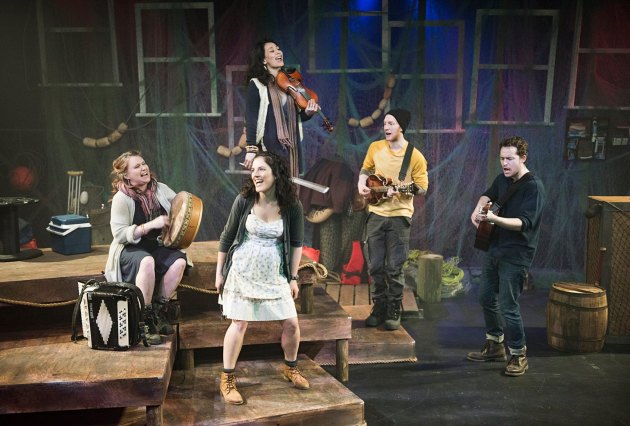 “The birth of not only a new play, but that of a promising new playwright … a uniquely Canadian love story filled with the sounds, dreams and superstitions of both a people and a nation.” ~Mark Robins, Vancouver Presents

“The Out Vigil is a love story that spans the entirety of our country and spills just over our borders … it speaks of ‘home’ in such a clear, honest and magical way.” ~Stephen Drover, Associate Artistic Director, Arts Club Theatre